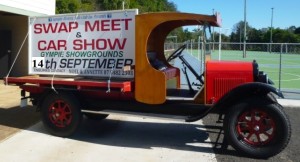 The GYMPIE HISTORIC AUTO CLUB Inc, formerly the Gympie Veteran and Vintage Car Club, was formed in November 1967 to foster the preservation, restoration and utilisation of Historic vehicles, i.e. those motorised conveyances which are more than 30 years old.

Membership is open to any enthusiast who attends two meetings, submits an application form along with the prescribed $30 fee and is then accepted at a meeting.
The club meets at 7:00 pm on the last Thursday of each month except December and conducts its AGM in January.

The clubroom is situated on the corner of Rose and Hyne Streets, Gympie, in the Excelsior Reserve. Local rallies are usually held on the weekend following the General Meeting, but there are exceptions. The club also supports other events and fundraisers organised by other community groups.
Our own annual fundraiser, the Gympie Swap Meet , is held on the 2nd Saturday of September each year. Having commenced in 1971 (1st swap was held on 7th Feb 1971), it is the oldest continual swap in Queensland. In 2013 the club added a car show to the event. Funds raised at this event go towards driver education programs for students at our local high schools.